​Virginia. He applied and was accepted into the Virginia Beach Police Academy in 2004. He graduated and became a patrol officer at the 2nd precinct in Virginia Beach. Brad was called to duty in early 2005 and was sent to Iraq. He served until his untimely death on August 3, 2005 in Haditha,Iraq along with 13 of his fellow Marines, most from the Lima Company from Columbus, Ohio.

Brad was a normal small-town boy growing up in a small town in rural Ohio. He became passionate about serving his community and country. He set out and accomplished many great achievements in this short life of 25 years. He was greatly concerned about his fellow officers and Marines, as well as the people of his country. He wanted his life to make a positive mark on this world. The proceeds of this race will enable Brad to continue to help his fellow Marines for years to come.

He was the middle child born to Steve and Janet Harper, with ​an older sister, Jennifer Clements, and a younger brother, Daniel Harper. He lived near Adamsville, Ohio during his early years on his grandparents', Tom and Mildred Mozena, farm. His paternal grandparents was Roy and Sara Harper of McConnelsville, Ohio. Brad and his family moved to Dresden, Ohio when he was in fourth grade and he graduated from Tri - Valley High School in 1998. He attended the Muskingum Area Technical College in Zanesville, now Zane State College, where he received his two year degree in Criminal Justice. Next, he attended Ohio University Zanesville an earned a BA degree in Criminal Justice. While he attended OUZ, he met Kendra Schiewe, a nursing student. They dated and married on August 29, 2002.

While attending MATC, Brad joined the U.S. Marine Corps in December of 1998. He attended boot camp in the spring of 1999 and continued his training. He was assigned to the Marine Reserve 325 Unit out of Brook Park, Ohio. He served as a reservist at Brook Park until 2004 when he and his wife moved to Virginia Beach, Virginia. He transferred his reserve unit to the 4th AAV stationed in Little Creek, 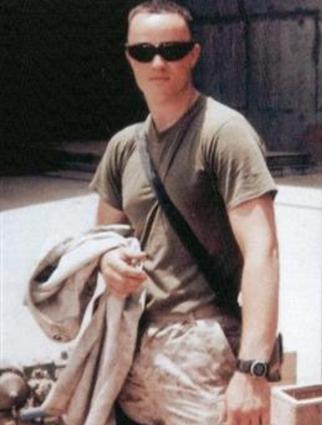